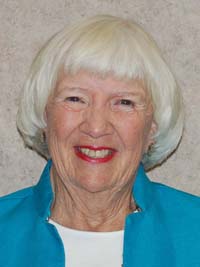 Anne Thomson, matriarch of one of the first track & field families of Delaware, has been a familiar finish line fixture up and down the state for more than 35 years.

She is always a rock of patience and calm demeanor through sometimes chaotic and understaffed surroundings, which has calmed many stressed coaches and athletes.

Anne has been officiating for track and field since 1975 when she was asked by Jim Tuppeny, Director of the Penn Relays, to assist with timing at that prestigious event. She has become the finish line anchor as first place timer, finish line coordinator and recorder of finish for all high school championships in the state ever since, as well as college meets and other notable events like the Penn Relays and college conference championships

Anne was recognized in 2009 by the Middle Atlantic Association of USA Track & Field with the Ronald Jackson award for lifetime achievement in the pursuit and achievement of excellence in track and field.

In the spring of 2010 the Penn Relays Carnival recognized Anne and her family with the Henry Steinbrenner Family Heritage Award for multi-generational loyalty and service to the Relay Carnival. Husband Bill has been a Penn Relay referee for nearly thirty years, daughter Carol competed in the Carnival in the early days of women’s inclusion there, and later as a coach of visiting college teams and finally as an official for the Carnival. Her son Gordon has been the head coach of several teams that competed at the Carnival.