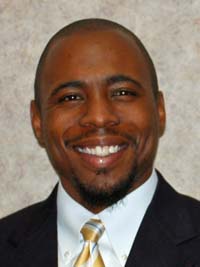 Butch is best known for his 7’0” high jump during the 1996 indoor season while competing for Newark High School. During the 1995 indoor season, Butch won state titles in the 55m dash and high jump. The following indoor season he met similar success in the dash and high jump, but also added a state title in the long jump, giving him a total of three titles and earning him the State MVP award for the season. Butch was just as successful in the outdoor track during his time at Newark High. He won outdoor titles in the long jump (1995 and 1996), high jump (1995), and the 100m dash (1996). Butch was also part of three championship winning 4x100m relay teams.

After a successful career at Newark High School, Butch moved on to the University of Delaware where he continued to compete as a sprinter and jumper. During his tenure there, Butch captured conference titles as a two-event winner (60m dash and long jump) in the1999 and 2001 championship meets, and was subsequently named America East Indoor Athlete of the Year both years.

Butch studied abroad during the 2000 indoor season, thus foregoing his junior year of competition. At UD, Butch won a total of four conference titles (two in the long jump and two in the 55m/60m dash).

He contributes his overwhelming success on the track to faith, discipline, and the strong coaching and mentoring by coaches Frank Smith and Jim Fischer.