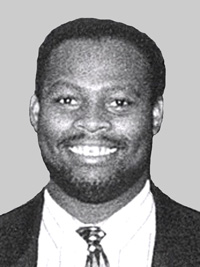 “The greatest schoolboy weight thrower ever from our state” is the reference usually applied to Terry Thomas (now Jamah Moswen). While representing Howard Career Center Jamah won seven State Titles Indoor and Outdoor in the shot put and discus from 1980 to 1982, culminating in three State Records in 1982. Jamah’s records of 195’10” in the discus and 64′ 8″ in the shot put were exceptional throws then and remain as records today in Delaware.

Moswen won the Penn Relays High School Shot Put Championship in 1982. After high school Moswen attended the University of Florida where he was named All-Southeastern Conference both indoors and outdoors.

He later competed for North Carolina State and was named All-ACC conference there as well, both indoors and outdoors, and participated in the NCAA Outdoor Championships for the Wolfpack. Jamah was a member of the US Junior National Track & Field Team.