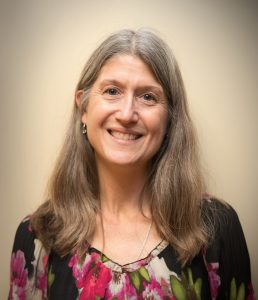 Pam discovered her love for running on the white sand playground of her elementary school in Wilmington, North Carolina. Her family moved to Delaware in the early 1970’s at the time Title IX was beginning to allow for greater opportunities for girls to participate in organized sports. In 1976, she and a few friends rallied support to begin a girls’ track and field team at Glasgow High School where she was a sprinter, hurdler and anchor of the sprint relays. She was also privileged to serve as team co-captain and to be chosen by her teammates as MVP each year until graduation in 1979.

Timing allowed Pam to be a part of the first Varsity Women’s Track and Field teams beginning her freshman year at the University of Delaware. She continued as a sprinter, hurdler and sprint relay anchor both indoors and outdoors and still holds a few sprint records. Pam was honored to serve as indoor and outdoor team co-captain from 1981-1983 and was awarded 6 varsity letters.

Pam received CoSIDA District II Academic All-American and CoSIDA Academic All-American awards for indoor and outdoor track and field and was named East Coast Conference Scholar Athlete of the Year in 1983. She was selected as the UD Alumni Association Team MVP in 1981, 1982, and 1983 and was selected as the University of Delaware Outstanding Female Senior Athlete of the Year for 1982-83. Pam continues to run for fun!