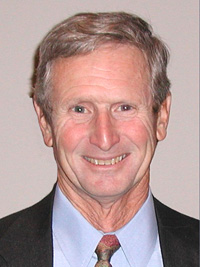 Bill, a Mt. Pleasant graduate, became the State’s premier 180yd Low Hurdler in 1960. That year he set the State Record of 19.9 seconds elevating the event to a new level. Bill’s :19.9, run on a cinder track, was an achievement only he attained until all-weather tracks had been in use for many years. Bill was undefeated in Dual Meets in 1960. That year he set meet or State Records in every major meet including the Conference (1959 and 1960), County, State and State Open meets.

William H. (Bill) Francisco was inducted into the Delaware Track and Field Hall of Fame in 2003. He has served as a Governor on the Board of Governors since 2007. Bill ran Track for Coach Bill Crowthers at Mt. Pleasant High School, for Coach Jim Kehoe at Maryland and Coach Jim Flynn at Delaware. A serious leg injury ended his competitive collegiate running career. In 1995, Bill started coaching older (over 40) runners to run long distances (5K through Marathons). Bill also coaches High School Track in Nevada. He is currently Co-Head Coach of the Desert Oasis High School Track and Field Team, Las Vegas, NV.