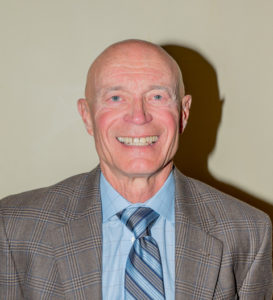 Over 30 years as track and cross-country coach at the University of Delaware, he has guided over 100 athletes to individual championships, helped countless others to superior college achievement, and broadened access to the sport throughout Delaware and elsewhere. Becoming the Blue Hens coach in 1982, he was named America East Conference Coach of the Year five times, winning the award for indoor track in 1993 and 1999 and for outdoor track in 1993, 1994, and 2000. His indoor teams went 121-36-1 in dual meets and went undefeated from 1987 to 1991. Five of his teams won conference titles; another 12 finished second. Many of those champions were not high school stars but blossomed under his mentoring. 119 of his athletes won individual conference championships.

He was president of the NCAA Division I Cross Country Coaches Association and coached the East team at the 1991 Olympic Festival. He has been a goodwill ambassador and clinician in Honduras, North Yemen, Egypt and China. In 1988, he delivered a research paper to the Seoul Olympic Scientific Congress prior to the Games. He has been a board member of USA Track & Field’s High-Performance Division and Mid Atlantic Association. As an assistant professor of physical education, he has instructed and coached many of the state’s track coaches and was a USATF national coaching certification instructor.

On his own time, he has trained hundreds of Delaware adults in a Tuesday Night Group that he founded and operated for the community for many years. He was active with the B+ Foundation, has served on the board of directors for Girls on the Run and advised the Leukemia Society and Special Olympics Delaware. Now the coach at Ursuline Academy, he has also coached at Sanford School and Delaware Technical College, where he served as the Athletic Director for a short period. Jim founded the Delaware Track and Field Hall of Fame in 1994 and served as its president until 2015.