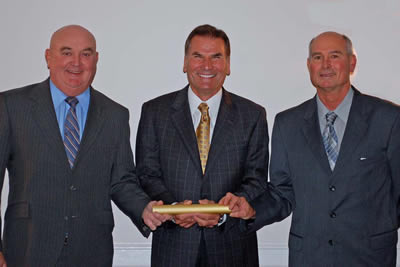 This 1972 University of Delaware Mile Relay team set the School Record with a time of 3:14.2, finishing 4th in the Penn Relays IC4A race, a time that still stands as the School Record and also converts to a 3:13.0 for the 4 x 400 meters.

The team consisted of four local athletes who were non scholarship athletes. Running leadoff was Lloyd Mears (Georgetown/Sussex Central) with a time of 48.9y (48.6m). Running second leg was Peter Sukalo (Christiana) whose split was 49.2y (48.9m). Third leg was turned in by John Flickinger (Christiana) with a split of 48.2y (47.9m) who handed off to Ed Mongan (Tower Hill) a Track Hall of Fame Inductee with a split of 47.9y (47.6m), bringing the team home in fourth place.

The team was coached by Track Hall of Fame Inductee Jimmy Flynn. The team also won the Middle Atlantic Conference Mile relay Championship with a new conference record time of 3:15.6.