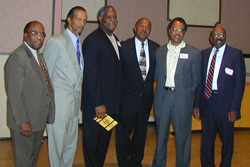 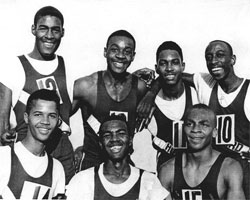 Arguably the greatest Delaware high school boy’s cross country team of All Time. The 1958 State Champion team set and still holds the record for the lowest score ever, 17 (only one division in 1958). They were undefeated in dual meets and took the City Title with a score of 18. This historical team was coached by the late and legendary George Johnson, who was inducted into both the State Hall of Fame and the State Track & Field Hall of Fame. Their order of finish; Bob King, 1st, Melvin Perry, 2nd, Marvin Hackett, 3rd, Calvin Perry, 4th, Art Collins, 7th, Phil Anderson, 15th, and Emmett Osburn, 55th.